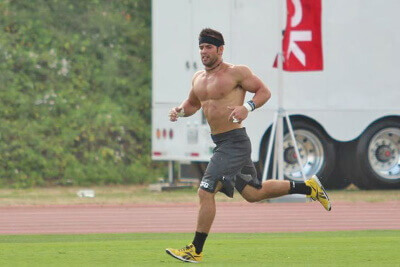 Froning was born in Mount Clemens, Michigan. Soon after he moved to Cookeville, Tennessee, where he currently resides. There he attended Cookeville High School where he played baseball and was an all-district, all-region second baseman. He also participated in football. Upon graduating in 2005, Froning received a baseball scholarship to Walters State Community College. Soon after, Froning decided to end his baseball career, and began working at the Cookeville Fire Department, while continuing his studies at Tennessee Technological University. While working out with the fire department, Froning became interested in CrossFit, which he soon developed a passion for and in 2010, he began coaching and competing

Froning does not adhere to the Paleolithic diet which is popular in the CrossFit community.He doesn't adhere to a specific diet plan, preferring to listen to his body. He eats a lot of peanut butter and drinks whole milk. During the day he typically doesn't eat that much but he'll have a large meal at night and he drinks a lot of protein shakes.

He reports to working out multiple times a day and to preferring not to take days off from his training like many others do.

Some of Froning's methods are discussed in his 2013 memoir. The CrossFit Games Rich Froning is the Fittest Man on Earth for the third year in a row. www.american-supps.com