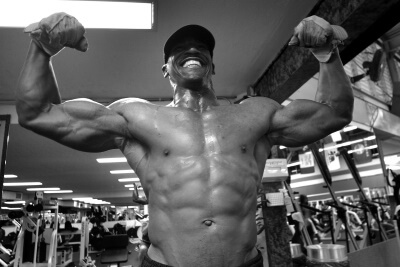 The biceps is the most famous muscle that everyone, whether male or female, can hook immediately right away without thinking about where it is located. Basically he rather belongs to the smaller muscle groups in our bodies, which is claimed in nearly every upper body workout with. Especially at the back exercises the biceps is mitbelastet. Nevertheless, the biceps with different exercises should be additionally trained if you want to bring powerfully to grow it or have at least applied on attractive, toned arms.

Your bicep should depending on the objective either on a separate day you do exercise will take place your upper arms or following a major muscle group, such as the back or chest. In the typical train movements in back training the biceps is stronger mitbelastet. Do you wish to exploit it further, it makes sense to train him at the terminal. The classic push exercises like the chest training the triceps is more mitgefordert. Here it makes sense to train your bicep in connection to burden him more able. No matter how you decide, you should schokieren your muscle always in between, if you do get to grow want and it works only if you keep checking back for administering them a package with which they do not expect straight.

While you tense a muscle, his opponent (antagonist) relaxes the opponent of the biceps, the tricep. This muscle opens into 3 heads, hence the name Tri (three) -zeps. Together with the biceps, the triceps is critical to the appearance and thickness of your arms. Unfortunately, often give women the triceps exercises not enough attention. This arm region is doing in the women quickly limp, which unfortunately is quite natural by the structure of the skin, but can be reduced with a balanced trotzem training plan.

When biceps build two things to consider. The height and length of the biceps. Both are genetically predetermined. However, you can with a decent workout by you Who do you train your biceps and arm flexors, the best rausholen them what is genetically possible. You should be as with any training really focused on the correct muscle strain and make the contraction.

The known isolation exercises for the biceps are the curls, in which there are countless variants.

Bicep exercises with the barbell and EZ-bar

Bicep exercises in the gym

The bicep of the upper arm (biceps) is a biceps, spring whose two heads at different points of the scapula. There they are the shoulder muscle (deltoid musculus) completely covered, so that the division is not visible. The biceps united in a whole muscle belly, and is in a strong tendon to a powerful muscle cusp of the spoke to (bones of the forearm) below the Elle arc. The two heads are in long head (caput longus) and short head (caput breve) differed. The long head is veantwortlich for the forearm rotation and the short head primarily for the diffraction of Elle arc.

Under the bicep is another muscle that is responsible for the appearance of thick arms, the arm flexors (brachialis muscle). The Biceps Curl is due to its construction and its location even more than the biceps and accepts characterized just in training an important function. In addition, a massive arm flexors while ensuring that the biceps appear even thicker.

When the biceps of the upper arm three tendons play an important role. The tendons that originate on the two heads on the shoulder blade and the strong tendon at the muscle belly in the elbow. One of the most well-tested discomfort in the shoulder area is an inflammation of the biceps tendon or even a torn biceps tendon. What manifests itself initially in a slight popping noise and is often confused with an injury in the shoulder joint, can develop into a painful affair with time if no further measures are taken. Injuries to the tendon at the elbow occur relatively less common. Most, however, the biceps tendon of the long head is affected.

A bias of the fabric also ensures an increased risk of injury to the biceps tendon.

leading causes of preloads the fabric

Even if you want to build as a woman no massive biceps, you should at least a few of the exercises below involve in your training plan and so work out your upper arms. First, you'll basically build because of your lower testosterone production less muscle bulk and secondly are slim, toned arms sexy as a woman and attractive. In addition, you can withstand the daily wear and tear better if you're using more of your training. You need certainly no separate Armtag but with 2 bicep exercises and triceps exercises you reach certainly a very good result. How often you should train your arms a week, depends on your training schedule and your desired result. For more suggestions, as far as your training plan as a woman, looking like Simply drop in our category Training Plan to women.

If someone knows how to build a large biceps, then the German Machine Markus Rühl. His upper arm workout is not only impressive, he told you the basics that have to note your. Should it really be someone among you who does not know Markus Rühl, Markus Rühl is a professional bodybuilder, and a member of the Hall of Fame of the German Bodybuilding and Fitness Association E.V .. He was multiple Mr. Olympia participants and can look back on a remarkable professional career. His recommendations of All-Stars can be found incidentally also in our shop.