Rich Piana All Day You May by 5% Nutrition Rich Piana Bigger By The Day by 5% Nutrition 90 Capsules 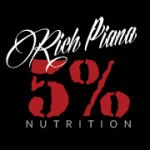 Rich Piana started weight training at a young age and grew so much that he quickly made the decision to become a professional bodybuilder. He competed in many competitions until Rich decided to concentrate on Youtube. This is how his rise and international success began. Shortly thereafter, Rich PIana was sponsored by Mutant.
On this platform and in other social media, Rich Piana also achieved a lot of fame. His YouTube channel kept going and Rich became known worldwide. So it was clear that he was launching his own brand of supplements. Rich Piana became known, among other things, for speaking publicly about his steroid use. His open approach to this topic has made him very popular with his bodybuilding and fitness fans as he is one of the few who are honest.

Rich Piana defined himself by creating and living the 5% lifestyle. In other words, he was ready to sacrifice and what the other 95% of the population did not want in order to achieve his goals. This mentality lives on in the 5% nation and community of followers who continue to learn about Rich and apply his principles to achieve greatness which is 5%. Rich's legacy will inspire the bodybuilding community for many, many years to come. Every day we hear new stories from 5% athletes who are inspired by the message, heritage and lifestyle of Rich and carried on by the 5% community in general.

5% Nutrition is the supplement brand from Rich Piana with its first Pre Workout Kill it, its Massgainer Real Food and its Aminos and BCAAs ALL DAY YOU MAY or AllDayYouMay.
I think Rich Piana brought really cool things to the start.
Rich Piana's Supplement Line consists of:


Rich Piana All Day You May

Rich Piana All Day You May Amino Acids

One of the craziest boosters out there.

Rich Piana Bigger By The Day

The Bigger By The Day should definitely not be missing in your 5% Nutrition collection!

Rich Piana and Martyn Ford from 5% Nutrition at FIBO 2016 with American Supps.