Required for / function: Formation of the red blood pigment, part of important biochemical and enzymatic processes in the body 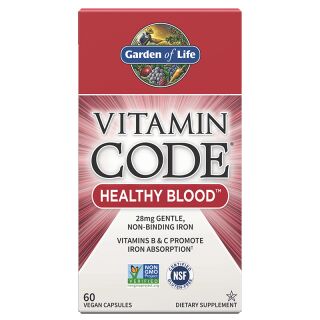 Iron is an essential trace element and is involved in many vital processes in the human body, especially blood formation. A certain amount of iron must be present in the body for these processes to run smoothly. This is not always possible through diet, as several factors come together so that the body can actually absorb and use the iron it has absorbed. Here iron can be used as a dietary supplement to prevent iron deficiency. However, it is important that you use a high-quality iron product, such as from Garden of Life. Garden of Life relies on getting the nutrients from real food and not producing them synthetically. This guarantees a better absorption of the body. We can particularly recommend:

Iron also plays an important role in many biochemical and enzymatic processes, such as the production of neurotransmitters such as serotonin and dopamine, energy metabolism, immune system function and the build-up of collagen.

If there is a reduction in total body iron, it is referred to as iron deficiency. Iron deficiency is one of the most common deficiency diseases and is very common worldwide. Children and women in particular (especially during pregnancy and women with heavy menstrual bleeding) often suffer from iron deficiency. An iron deficiency develops gradually. First, the body uses iron stores. If the stores are exhausted, blood formation is impaired. The typical iron deficiency symptoms and a hemoglobin value (HB value) that are too low arise. 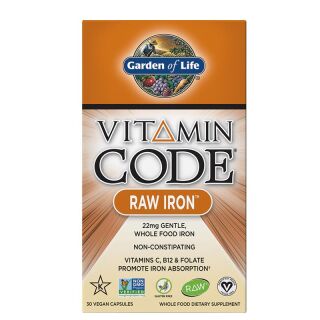 According to the DGE, the recommended daily intake is 10-18 mg, although 1-2 mg per day could be considered completely sufficient if iron were absorbed better by the body. Just 10% of the amount originally ingested is used by the body. The absorption is also hindered by phytic acid (an active ingredient that is particularly found in cereals) and black tea. Iron from animal protein is usually better absorbed, mostly up to 30%, which explains why a steak is considered an optimal source of iron for bodybuilders. The maximum intake can also be increased by adding vitamin C at the same time. Reason enough to season your meat with a dash of lemon juice soon.

Dr. Michael Colgan advises intensely exercising athletes to consume 20-35 mg daily. One reason for the significantly higher recommendation compared to the DGE is that iron is excreted through sweat, among other things.

Natural sources of iron are meat, fish, cheese, eggs, liver, chocolate and legumes, although the content of the individual foods is often insufficient to meet the increased requirements in sport. Beef, for example, contains 2.5 mg per 100 g, which would correspond to a good portion of 1,400 g with a daily requirement of up to 35 g. The misconception that spinach is a veritable iron bomb is based on a point error that was made during the analysis. 100 mg does not contain the often-touted 26 mg iron, but only a tenth of it - namely 2.6 mg.

A supplementary intake of an iron supplement is not absolutely necessary for bodybuilders who eat primarily meat. A supplement is more recommended for those athletes who only eat iron-containing foods irregularly, as well as for women who are subject to high blood and thus iron loss due to their monthly period.

Iron deficiency occurs quite frequently, especially during pregnancy, and should be watched carefully. During pregnancy, women have to produce approx. 30 to 40% more blood so that the growing child has sufficient blood supply and can develop properly. The iron requirement during pregnancy is therefore significantly higher than usual. Pregnant women should consume 30 mg of iron daily through their diet to ensure a sufficient supply of iron. It is best to stand three times a week lean meat (especially beef) on the menu. Women who follow a vegetarian or vegan diet while pregnant should pay particular attention to a very adequate supply of iron. These include iron-rich vegetables and grains (e.g. millet). Since vegetable iron is not so well absorbed by the body, fruits and vegetables rich in vitamin C should be consumed at the same time.