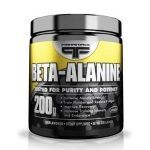 Alanine or beta alanine you count the amino acids and is gladly bought in our fitness shop. Important amino acids are essential amino acids such as the BCAA. Pre Workout boosters often contain beta alanine, creatine, and glutamine.

Alanine was discovered in 1850 by Adolph Strecker.

L-alanines are the proteinogenic form of alanines. This means that the body can only use the L-alanines for muscle building.

"From the construction of the protien chain, ALANINE (L-Alanine) represent 29.7% of the amino acids"

Alanine is a non-essential amino acid that is chiral. This means that the amino acid can occur in two mirror-like forms. L-alanine is proteinogenic, D-alanine is a building block of murein, the basic substance of bacterial cell walls. There is also the beta-alanine, which is not non-proteinogenic, but still plays an important role.

L-alanine is used to build many proteinaceous substances. Together with glutamine, alanine is a major substance for the aminostage change of the blood and is primarily synthesized by the muscle cells from lactic acid and ammonium ions. Subsequently, alanine is absorbed via the liver and converted to pyruvate. Under the influence of stress hormones, pyruvate is used for glucose production and thus regulates the blood glucose level.

Alanine is also commonly prescribed in hypoglycaemia to prevent a sugar shock. Alanine supplements allow for an extremely rapid supply of energy, since the formation of immediately available glucose is stimulated. Other important functions of this amino acid are the strengthening of the immune system and the prevention of kidney stones

During a one-sided, protective diet, but also under stressful conditions, such as illness, overload or even through intense sports, an increased alanine requirement may occur. Athletes and, in particular, athletes have in principle an increased need for amino acids, especially when it comes to muscle building.

Beta alanine is primarily used to stimulate muscle building and to prevent muscle breakdown. At the same time, beta-alanine supplementation acts as an acid buffer so that the typical burning does not occur as quickly as during the strenuous activity due to the hyperacidification of lactic acid in the muscle. This increases the muscle endurance and allows more repetitions to be performed. More repetitions mean a higher stimulation for the muscle, which promotes muscle building.

Incidentally, the dipeptide carnosine, which is responsible for our youthful appearance, is formed from beta-alanine and histidine. Carnosine is used in the anti-aging area.

By selecting "Accept all", you give us permission to use the following services on our website: YouTube, Vimeo, Google Map, ReCaptcha. You can change the settings at any time (fingerprint icon in the bottom left corner). For further details, please see Individual configuration and our Privacy notice.

The settings you specify here are stored in the "local storage" of your device. The settings will be remembered for the next time you visit our online shop. You can change these settings at any time (fingerprint icon in the bottom left corner).

To view Vimeo contents on this website, you need to consent to the transfer of data and storage of third-party cookies by Vimeo..This allows us to improve your user experience and to make our website better and more interesting.Without your consent, no data will be transferred to Vimeo. However, you will also not be able to use the Vimdeo services on this website.

In order to display Google Map on this page, your consent to the data transfer and storage of third-party cookies from Google is required.

To submit forms on this page, you need to consent to the transfer of data and storage of third-party cookies by Google. With your consent, reCAPTCHA, a Google service to avoid spam messages via contact forms, will be embedded. This service allows us to provide our customers with a safe way to contact us via online forms. At the same time, the service prevents spam bots from compromising our services. After you gave your permission, you might be asked to answer a security prompt to send the form. If you do not consent, unfortunately you cannot use the form. Please contact us in a different way.

Would you like to see these contents? Activate the desired contents for one session only or allow the website to remember these settings. Once you have given your consent, the third-party data can be loaded. For this, third-party cookies might be stored on your device. You can change these settings at any time (fingerprint icon in the bottom left corner). For further details, please see the Privacy notice.